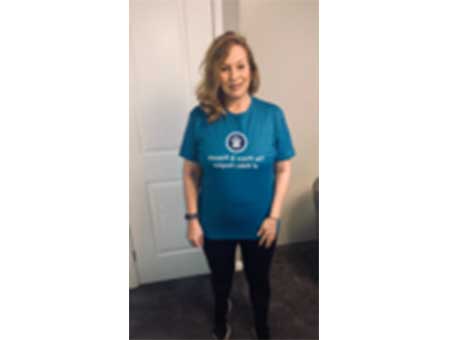 News
by admin
No comment(s)

I have been trying to increase my fitness levels for so long now. I talk about it, start it all guns blazing and then life always appears to get in the way, or so I thought….

My above theory was really put to the test after the hospice ‘Going for Gold’ campaign was launched and get Fit for February walking 10,000 steps every day, was set up as a challenge. After reading about this in the hospice newsletter I really felt I could combine getting fit with raising some money for the hospice.

I told the family I was going to do this, and it’s fair to say they reminded skeptical as I had said so many times I was going to carve out time for me to get fit. This skepticism I believe made me more determined and full of optimism when I signed up for Fit February.

Ok now I had signed on the imaginary dotted line I needed to commit, how hard could it be walking 10,000 steps each day for a month?? My other challenge was raising money as my previous experience of raising money for a charity had been running about with a sponsor sheet asking people to donate and then chase everyone up again after completing the challenge for the money. To be honest this filled me with dread. However, after talking to Caroline in fundraising she persuaded me that setting up a ‘just giving‘ page would take all of the hassle out of this for me, and would just make it really simple. After several attempts at setting this up from home and realising what a novice I was, I gave up and enlisted the help of an expectation. Caroline had this set up in less than 6 mins!!!! Now all I had to do was share on social media. Again this was a first and I must admit I was a tad nervous putting it out there on social media not knowing what kind of reaction i would get created some anxiety but I was honestly worrying needlessly. The minute the post went live I received such positive comments from friends and family that fuelled my enthusiasm. So off I went entering into the world of fitness challenges that I had seen others post about admiring their determination from afar.

So Fast forward to the end of February and completing my challenge what were the highs and lows that I can share.

Starting with the highs (and there are many)

Getting fit and raising money. I am really proud of the hospice and the care they deliver both on a professional and personal level so receiving ‘just giving’ alerts each day with a further donation given felt amazing and a real sense of achievement for me that I was contributing to hospice funds

Using social media as a platform to raise awareness and money as I said I had never done this before and I couldn’t believe the support I received. In the end, I raised £710 and much of this donated anonymously

So with all the positives were their negatives?? To be honest very little perhaps selecting the month of February as my first fitness challenge as the weather was brutal for much of it. However, I now continue to walk in all weathers and don’t make this an excuse for not doing it

Perhaps encouraging others to join me in my challenge. If a few of the staff had enrolled and got together to walk before or after shifts or even at lunchtime this would have made things much easier as in the end I walked the majority of it alone

Other than that I have nothing negative to say.

Would I do it again?? In a heartbeat so if there are other team members out there like me feeling nervous or shy please chat to me and perhaps we could do a future challenge together. Being honest the only thing holding me back from all of the above was myself. I hope my blog in some way encourages you to get involved in the Go for Gold Campaign supporting our hospice.